I am an over 60 year old artist who has been painting just about my whole life. I am also the father of a young man and young woman who have autism. Until the last few years I did not incorporate any of the issues around autism into my work. In recent years, however, I came to feel the need to address my children’s disabilities in my paintings. Whether this was a way to sort out my feelings or a way to force others to look at a most painful condition, I can’t say.

My current paintings feature a figure/figures in a world that is very strange; the subjects are my two children. In some pieces, the figures reside in landscapes of jagged mountains, winding paths, and anthropomorphic forms. More recently the figures are placed against a stage; on a raised platform or stairs; bizarre forms (animal-like, toy-like, with gaping mouths, holes and moving appendages) interact. The forms may be colorful and funny, but they are also missing body parts and facial features. While the subjects may not be reacting to their surroundings, they cannot escape them. In some of my pictures, the figures are in front; in others, they are hiding behind these strange forms. The environment is overwhelming, much as sounds, smells, touches, can be overwhelming for someone with autism. I am attempting to make metaphorically visual the internal forces my children live with.

I employ a collage of cut canvas pieces attached to the larger canvas. The collage gives a rough, heavy texture to the works, suggesting the feel of rocks, the folds of cloth, the wooden planks of a floor. The canvases are shaped; parts of the paintings jut out or are cut out from the larger rectangle. The use of the shaped, cut-off canvas is a metaphor for lives that are not whole, with legs, arms, torsos, that are cut-off. Since part of the painting is “missing”, the viewer extrapolates from what is seen to what would exist outside the frame.

My most recent paintings are diptychs and triptychs, two and three pieces that relate to each other and make a whole. The paintings can be viewed in two variations by switching the order of the works. Having two and three pieces allows for changes in time, space, and narrative. The alternate views change the mood and features of the subjects and how they interact with the characters and forms around them (i.e. are the figures coming together or moving apart; are the cut-outs in the center or at the edges?)

The paintings can be viewed as fun fantasies or surreal nightmares. With their intense color and size, the fantasy forms can seem more real than the less colorful human forms. Indeed, feelings can seem more intense than things one can touch. While these paintings relate to my particular situation, they are open to a range of interpretations. We are all disabled in some way. Our lives often feel surreal, conflicted and chaotic. 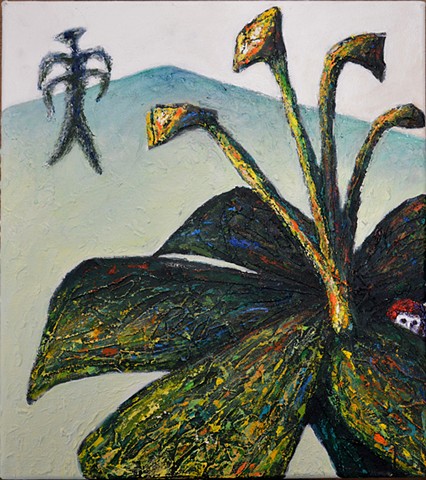 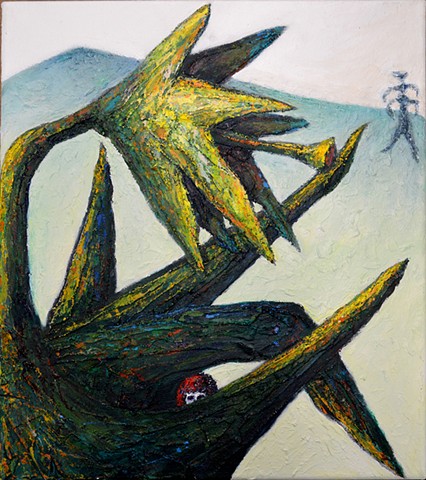 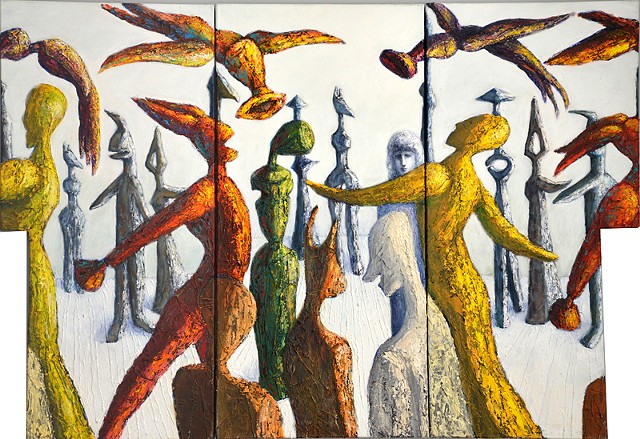